Apparently, my five-year-old girl Lia has told her friends her full name, including our middle name Domingo (which is my maiden name). Her classmate/BFF Yu Fei said that Domingo rhymes with flamingo and since then, Lia has wanted a dress with flamingos on it.

I took her and her cousin/BFF Gabi to my favourite fabric shop at People’s Park Centre in Chinatown called Brighton Accessories House. They spent a good thirty minutes roaming around looking for fabric for their dresses. The fabric there is mostly SGD6/yard, which is why I took them to this particular shop. Lo and behold, when they finally picked the fabric they wanted, I realised they chose from the higher-end shelf, where the fabric went at SGD12/yard. I didn’t have the heart to ask them to choose again, so I just went and bought it. She chose this cream and navy Sevenberry cotton lawn with hot pink flamingos, and it was very pretty. I was actually feeling quite pleased at how good her taste is in fabric. Gabi chose a pretty volcano design.

Lia and Gabi went home and discussed the dress style that they want. They decided it had to be off-shoulder with a high-low skirt. They even drew it out for me. Since I haven’t made an off-shoulder before and didn’t really want to self-draft, I looked for a pattern that I could use and found the Midsummer Dress by Striped Swallow Designs.

The instructions were easy to understand, and the pattern itself was well-designed. And can I just say that their logo is so pretty? Anyway, the only problem I had was the top was too short, and I had to unpick and extend the bodice by 3 inches. Otherwise, it would look like an empire-cut dress. For Gabi I had to extend even more than that plus take an inch or so at the waist because she is so slim.

I followed their suggestion and added hot pompoms in the ruffles, and I thought it gave a very nice touch. I’ll probably make this dress again at some point since it was such an easy sew. 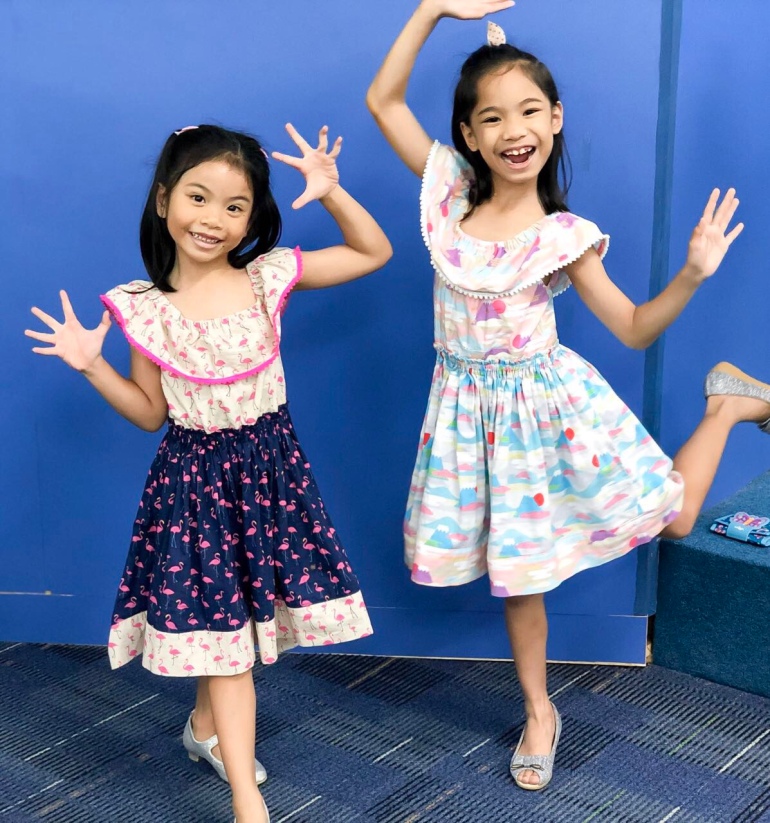