Four days before Chinese New Year, Lia reminded me that I promised to sew a cheongsam for her Chinese New Year party at school. I then reminded her that I had already borrowed her cousin’s cheongsam, but she insisted that I said I would find “metallic purple and gold” fabric.

I have absolutely no recollection that we ever had such a conversation – but then again, we have a habit of chatting in bed before we sleep, and I’ve fallen asleep while chatting a few times before. Maybe this conversation happened then. Plus, how can I resist when she said “But I love wearing the stuff you sew”?

I know a lot of people from The Sewing Network Singapore (a Facebook group I’m part of) use Porcupine Pattern’s qipao pattern. I’ve been seeing people sew CNY outfits but never thought I’d be part of it. When I realised I needed to make a cheongsam unexpectedly,  I visited their site and saw that they actually have a free pattern in only two sizes – and one (110cm) was perfect for Lia.

So I proceeded to download the pattern, watch the free tutorial on YouTube (which was very good) and rush to People’s Park Centre to find fabric. I was in a huge rush then because I was about to visit my sister at the hospital, and could only spend 15 minutes to shop. I picked up something purple with stars and rainbows, found purple frog buttons and bias tape to match, and quickly left.

When I showed the fabric to my sister at the hospital, she said it looked like pajamas. My heart sank when I realised she was right. Good thing Arab Street – the other haven for fabric shopping – was near KK Hospital. I’ve never been to Arab Street so I thought it was a good time to take a look. I gave myself 30 minutes to find a more suitable fabric for the cheongsam.

I realised Arab Street deals more with silks, laces and really really expensive fabric (one was at SGD150 per meter!). There were limited kiddy prints available, and very few fabrics below SGD10 per meter. Or perhaps I didn’t know where to look.

The first one I bought was a nice, shiny purple polyester that looks like linen at first glance. I’ve never worked with polyester, but since the store was about to close and it was only SGD5 per meter, I bought it. The next one I bought was a yellow polkadot print which I thought might work because of the contrast. I still wasn’t too convinced that I got the right one though so I kept looking. The last shop I went to had a few nice polka dots and I chose a cream base with gold and purple dots. I liked this the most but I let Lia choose what she wanted. Thankfully she chose the cream polka dots as well.

I started work that night and it was not too difficult because the video tutorial was very clear. What took longer was putting the bias tape and hand-sewing the frog buttons. 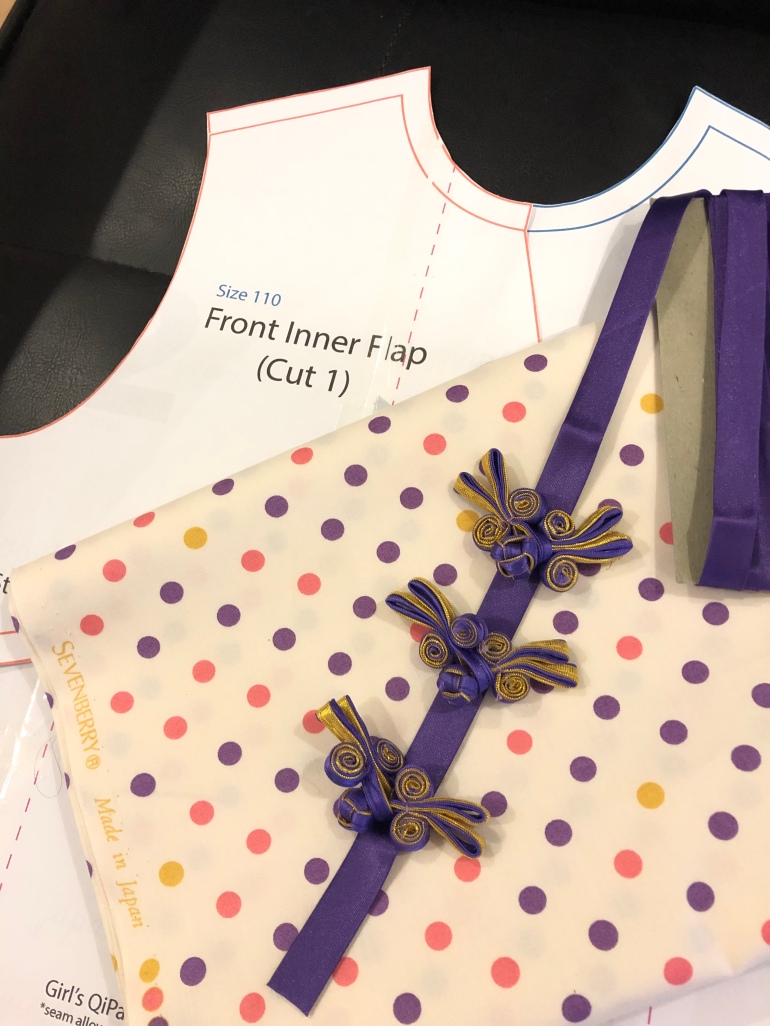 And here is the finished product… 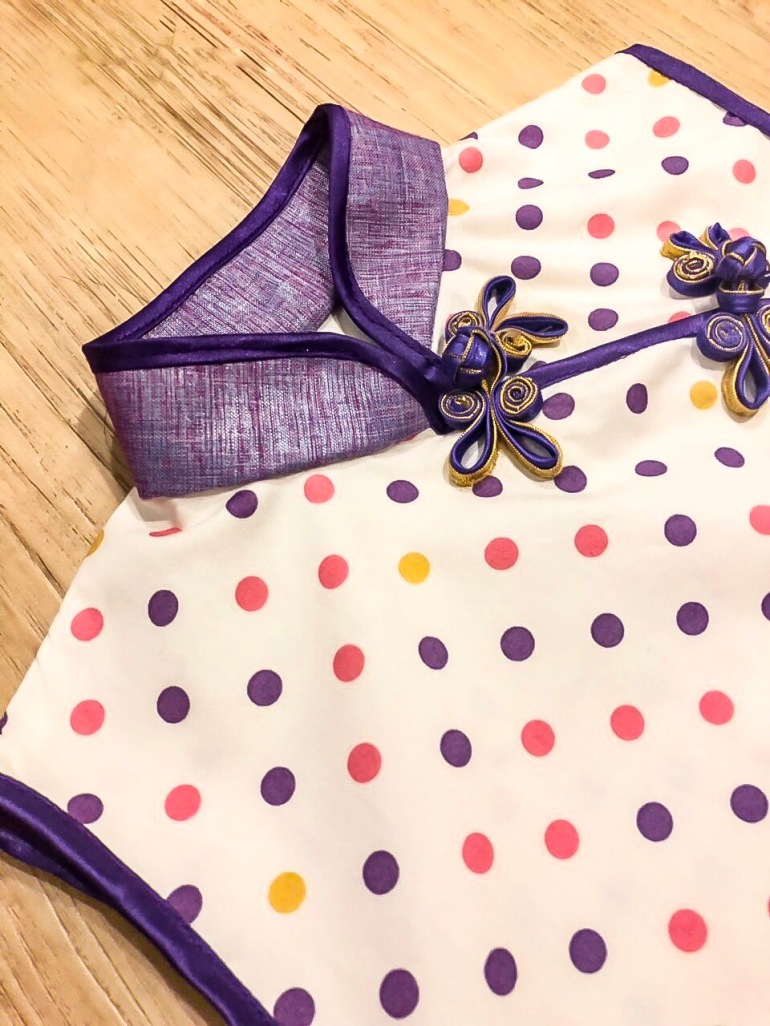 When I finished sewing the cheongsam, I thought – what about Sam? I had a bunch of other fabric left, so I decided to make a go for it and finally buy the Breeze shirt by Twig and Tale, which I’ve been wanting to get since last year. The smallest size was for 12-18 months, but I felt this was still a bit too big for my nineteen-month-old son. But it was okay. Better to make something a wee bit too big than the opposite.

This should have been a very easy sew. There are no buttons, no closures, and the pattern was well-drafted and the instructions and easy to understand. I had only one issue though – and it was in my choice of fabric. I will never make this shirt in a polyester again. If I used a cotton or cotton-blend, I would probably have finished the shirt in half the time. But the polyester refused to lie flat and doesn’t iron well, and I had to unpick and redo the facing before I could get it to lie flat enough. Anyway, I added purple bias tape mainly because I couldn’t make the hexagon design nicely for the front of the shirt. I used a decorative stitch for the first time on the sleeve cuffs and hems (which in hindsight makes it look a bit girly). And here it is… 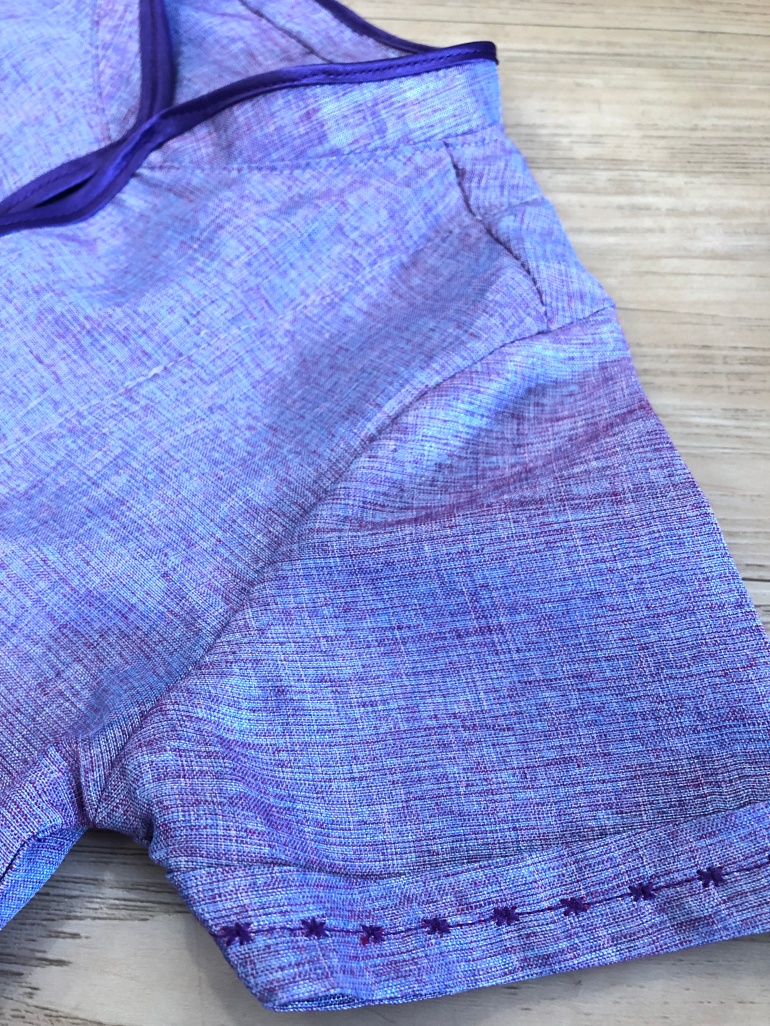 I used the purple polyester fabric for the collar in Lia’s dress, so I thought they matched quite nicely without looking way too matchy-matchy.

They wore it to church today and gladly modelled for mommy the seamstress and daddy the photographer.